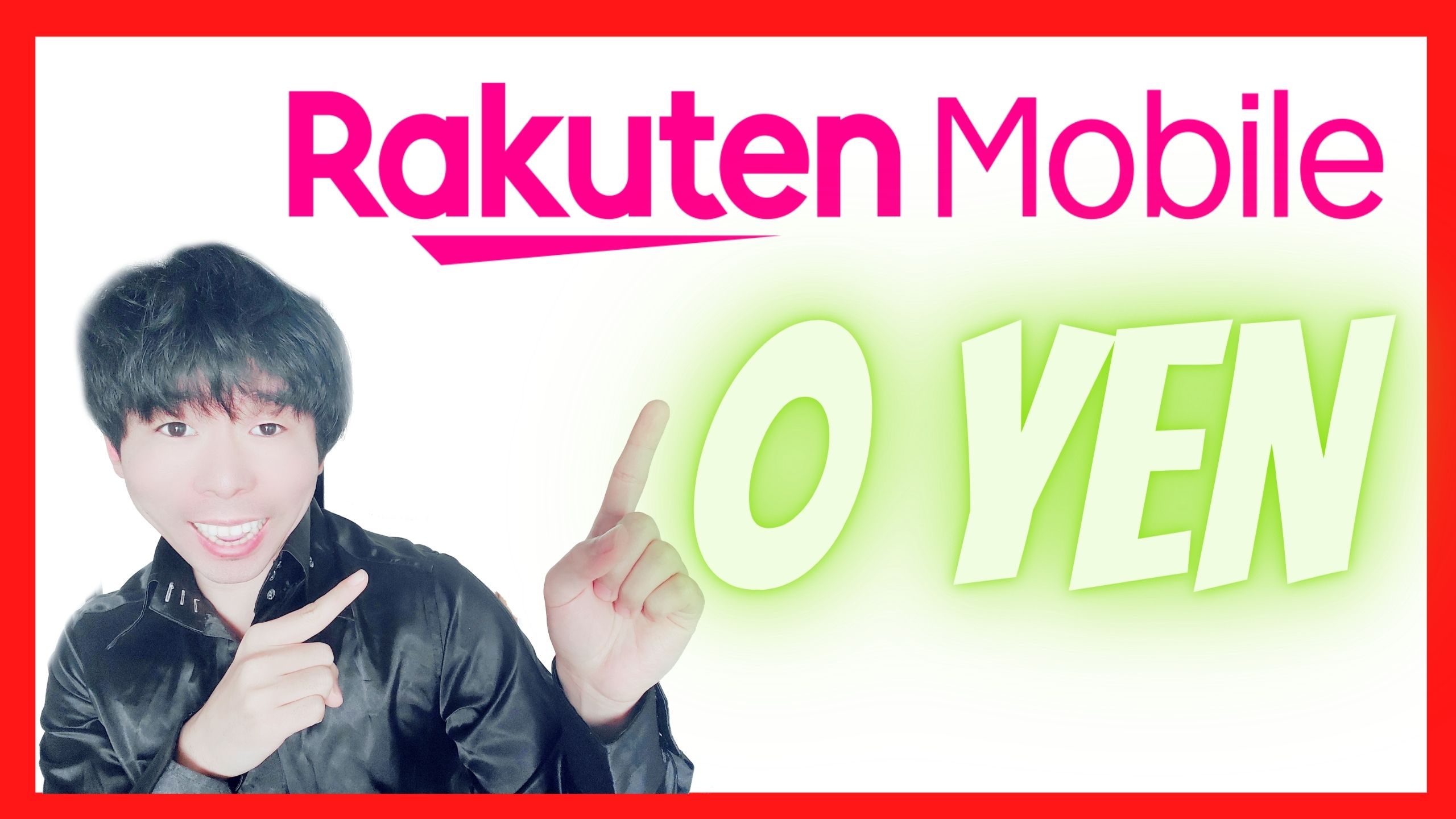 What is the best cell phone plan in Japan?

Nikkei Canadajin here and today I’m going to be sharing with you the best phone plan in Japan and how you can get it for 0 yen.

Ok, so what is the best phone plan that I have ever come across?! Great question.  That would be Rakuten Mobiles New Unlimited V1 plan.. So in this video I’m going to be sharing with you my personal experience using Rakuten and why I think it’s the best and how you can get it for 0 yen So make sure you stay until the end of the video to learn how! So if you don't want to read then just skip and watch this in depth review

What is Rakuten Mobile?

However, now Rakuten mobile is building their own cell towers kind of like how Elon Musk build a whole infrastructure for Tesla Rakuten mobile is trying to do the same thing except you know in the mobile industry.

Now while Rakuten has greatly expanded it’s coverage area within the past year there is a lot to be desired.  If you are in a big city like Nagoya or Tokyo then you will be covered needed but if you live out in the countryside you are probably asking yourself if the Rakuten mobile network can actually be relied on especially if you are living in a smaller city like I am.

The quickest and the most realiable way to find out if you will actually get full coverage is by going to their website and checking out their coverage map.  Now when you go on their site you can see that they have three different levels of coverage.

And while Rakuten mobile may not have coverage all over Japan yet it is quickly catching up and even in a place where there are no Rakuten towers you can still take advantage of using their partners (AU coverage) so no matter where you go you will be connected.

Ok, so now that you have decided that you want to go with Rakuten mobile the next question you should be asking yourself is if I can use my current phone.  If you have a phone you are happy with and don’t want to buy one of Rakuten Mobiles phones or a new phone then how easy is to switch?

Well on Rakuten Mobile's website it has a list of preapproved phones that are pretty much guaranteed to work; however, even if you don’t have a phone that isn’t on Rakuten mobiles list there is a good chance you will still be able to use your phone when you switch over.

So in order to tell if your non approved phone will work on Rakuten you have to look at the bands that Rakuten mobile uses and the bands that your phone supports.

Of course if you buy a phone directly from their website you won’t have any trouble about connections.

Now with Rakuten mobile they boost that you have access to their unlimited 5g network which means no throttling or slow load time in heavily populated times like in the morning commute.

As of today whenever this video is being filmed this is limited mainly to the big cities like Tokyo, Osaka and Nagoya, but as they expand their network you will be able to take advantage of their consistently expanding network.

Now this one was the big one for me.  I previously used Ymobile and any call over 10 minutes I would get charged.  And while I don’t actually call that much I sometimes am put on hold for long periods of time when phoning my bank or credit card institutions so that adds up pretty fast.

By using Rakuten Mobile you have access to their exclusive Rakuten Link app which allows you to call anywhere across Japan for free. While there are some restrictions the benefit of unlimited calling is well worth it.  Same goes for texting. As long as you are using the Rakuten Link app texting is completely free.

And speaking of unlimited calling if you travel overseas to any of their 66 countries  just by using Rakuten mobile you can receive unlimited texting and unlimited calling.  So you don’t have to keep on buying prepaid sim cards every time you go back home.

And when you travel you automatically get 2 gb worth of overseas data for free when you go to any of their 66 partner countries.  And the great thing to get unlimited calling, sms and 2gb of data it’s less than the cost of a dinner for two at mcdonalds.  So it’s only 980 yen per month to take advantage of this overseas package.

Now because Rakuten mobile is building out it’s very own network which requires a lot of cell towers that need to be built… it’s not all across Japan yet and so you will find if you are in a smaller city or in the countryside that you instead be connected to their partner network AU.

While there is nothing wrong with AU you won’t get that unlimited data that you would have if you are connected to the Rakuten mobile network.

Now personally, I don’t think this is a negative but this point has been brought up in forums that they don’t like using a third party app to make phonecalls.  Now the truth Is that you can still make phone calls using your regular phone but if you don’t go through Rakuten link then you won’t get that unlimited talk and you will be charged….

Personally, I don’t see any difference between using their app and just using the regular phone function but it’s up to do to decide which one you want to use.

While the big companies like Docomo have English support during working hours because Rakuten mobile is fairly new they don’t have that much of an extensive support system when it comes to English support.

So if you can’t speak Japanese you might be waiting a while to get any kind of support in English.  With that being said, I have found their online messaging service to be great. Just use google translate and you should be able to communicate well enough to answer your question.

This is a big one that many people have had trouble with.  If you try to register at a Rakuten mobile store you will need at least 1 year on your residence card or else they won’t allow you to sign up.  Now a lot of people are on year to year contracts so this makes it extremely hard to sign up for Rakuten mobile even if they want to give Rakuten their money.

With that being said though there is a way around this.  Register online and select the option to have your sim card delivered directly to your house.  The way you completely bypass the need for them to check your residence card.  Just make sure when the delivery person comes to give you the Rakuten mobile sim to have a piece of id that exactly matches the name that you registered for or else they won’t be allowed to hand over the package to you.

Now you probably thinking that is great and all but what is the actual cost.  Well at this moment you can get it free for three months! Which means you get up unlimited data, unlimited calling and unlimited text for free.  And the best part is that if you don’t like the service, support or whatever reason you have you can just port your number to another company free of charge.

Then after the three months it is only 3000 yen for all those benefits.  So you are basically saving 9000yen since the first three months are free.  I mean that’s enough money to buy a Animal Crossing!

Ok now you are probably wondering that is great but what if I don’t use that much data? Well this is where I’m going to share with you the secret of getting your phone plan for free while still enjoying all the benefits Rakuten Mobile offers.  And although it’s not plastered on the Rakuten Mobile website if you look into what other plans they offer you can actually get your phone bill for 0 yen if you use less than 1 Gig.  And this is great for those who are just connected to wifi wherever they go!

So say the average phone bill is around say 3000 yen.  That means you can save 36,000 yen per year! I mean that’s basically like getting a free Nintendo switch.

Now for myself, I’m living in a small city but I have full coverage wherever I go and it will only get better in the future.  So right now you can get unlimited calling, unlimited data and unlimited text for FREE.  So you can either keep on paying 8000 yen for the main carriers and waste your money or you can join Rakuten mobile and pay 0 yen.  And even if you don’t like it for whatever reason you can just switch back to your old phone provider at no cost.

So if you are looking to get a new phone from Rakuten Mobile directly you can get some serious points and discounts.  The only thing is that what kinds of phones they offer is limited….

Personally, if you are looking to get a new phone  I recommend using Amazon. This is because if you go to other mobile stores like docomo in Japan they tend to put a crap ton of bloated software installed on their phone and if you order from amazon you don’t really have that problem.   I’m currently rocking a Samsung galaxy s10+ and it works perfectly with Rakuten Mobile.  If you want to check that out and help support this channel  then I’ll leave a link down below. Also let me know in the comment section down below what your experience is with phone companies in Japan.  And as always everyone stay waku waku.